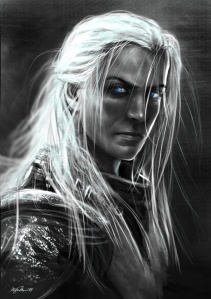 There must be both dark and light. I will do what I must to keep the balance, as the balance is what holds all life. There is no good without evil, but evil must not be allowed to flourish. There is passion, yet peace; serenity, yet emotion; chaos, yet order.

Simtre (character sheet) doesn’t remember much of  the first century of his life, before he took the name, Simtre. He lived with his evil kin in the Underdark, living for pleasure and for the glory of his house.

He can remember voices, and certain events. He can remember his sister but not her face, just her evil grin. The praise of his house for the battles fought and won, and the many dead he left on the field. Though he does not dwell on trying to remember, he has decided to leave the past in the past, and live in the moment.

He was almost killed, and left for dead though he doesn’t remember how it happened or why. The clearest memory he has is of waking up, and being confronted by a god, Aureon, for the evil he has done in the world, and how it has thrown off the balance of good and evil.

Through reason and the understanding of a god, Simtre came to see the lies and selfishness of his race and those who serve only evil. Now Simtre serves neither light nor dark, but is charged that the darkness does not destroy the light. He is not meant to be the light in the darkness, but to protect the light from being snuffed out. He still has the inclinations of his race and his life before, but he can now see the world in a different perspective.

Over time, he learned that he could not do what he felt he needed to do on his own, and with no authority. He learned to live among humans and the other races, even though they  despised him, but as fly’s despise a spider, as they normally would have been little more to him. Despite this, or perhaps because of it*, he was accepted as a town guard and earned the rank of Lieutenant as a detective.

He has done well, not least because he is not bothered by using his dark skills to uphold the law. He doesn’t have the week stomach as those he works with, and feels more comfortable in the dark, only enforcing the law while on duty, but even so he is very effective simple by his presence. Outside of his duties, he is on the lookout for particular kinds of evil **, that disrupt the natural balance.

(Think of a Sith that turned to a Gray Jedi)

* When Simtre started as a town guard, mostly because they were to afraid to say no and were waiting for reinforcements, he found and killed a few of the most wanted criminals; some he brought back alive. He never explained why some had to die and some had to live, he never felt he needed to explain himself. At first he was going to be reprimanded and possibly punished, but when crime in the city dropped by nearly 80%, he was given a medal. The new crime lords of the city know to not cross the line that Simtre has drawn.

** Simtre is very protective of women that remind him of his sister. He is not sure why, but he doesn’t feel he needs to know. Though he feels it is a weakness, he can’t seem to shake it.